Jodi, or jodi.org, is a collective of two internet artists: Joan Heemskerk (Bogotá) and Dirk Paesmans (Caracas). Their background is in photography and video art; since the mid-1990s they started to create original artworks for the World Wide Web. A few years later, they also turned to software art and artistic computer game modification. Since 2002, they have been in what has been called their "Screen Grab" period, making video works by recording the computer monitor's output while working, playing video games, or coding.

To those that aren't in on their conceptual jokes, Jodi's works seem inaccessible and impenetrable, appearing to make the user's computer run amok. For example, their 1995 work http://wwwwwwwww.jodi.org/ appears at first glance to consist of meaningless text, until a glance at the HTML source code reveals detailed diagrams of hydrogen and uranium bombs.

In more recent works, they modified old video games such as Wolfenstein 3D, Quake, Jet Set Willy, and the latest, Max Payne 2 (2006). Jodi's approach to game modification is comparable in many ways to Deconstructivism in architecture, because they would disassemble the game to its basic parts, and reassemble it in ways that do not make intuitive sense. One of their more well-known modifications of Quake places the player inside a closed cube with swirling black-and-white patterns on each side. The pattern is the result of a glitch in the game engine discovered by the artists, presumably, through trial and error; it is generated live as the Quake engine tries, and fails, to visualize the interior of a cube with black-and-white checked wallpaper.

Jodi's "Screen Grab" period began with the four-screen video installation "My%Desktop" (2002). The piece appeared to depict mammoth Macintosh OS 9 computers running amok: opening windows cascaded across the screen, error messages squawked, and files replicated themselves endlessly. But this was not a computer gone haywire, but a computer user gone haywire. To make this video, Jodi simply pointed-and-clicked, dragged-and-dropped so frantically, it seemed that no human could be in control of such chaos. As graphics exploded across the screen, the viewer gradually realized that what had initially appeared to be a computer glitch was really the work of an irrational, playful, or crazed human. 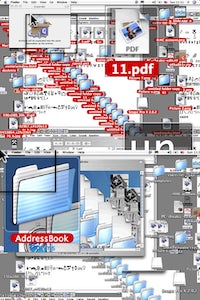 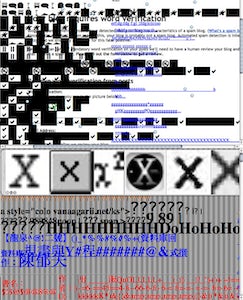 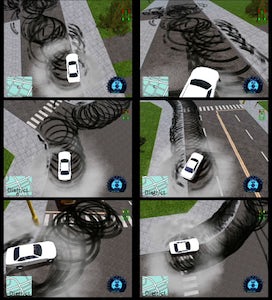